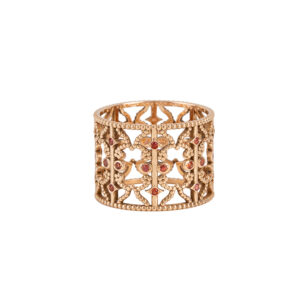 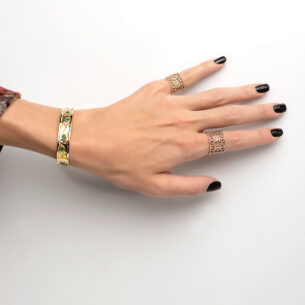 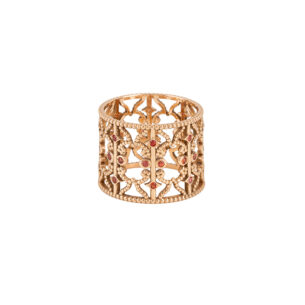 Grapevines and making of wine in Egypt goes back to ancient antiquity. In predynastic and early dynastic periods (3200 bce and before) vineyards existed for the use of Egypt’s rulers and nobles. Wine’s benefits were traced back to the gods and goddesses; it was said to be their “divine efflux” . According to the Greek writer Diodorus Siculus, the Egyptians thought that Osiris was the inventor of viticulture and taught winemaking to the Egyptians. Egyptians thought that wine had within itself the secret of rebirth and renewal of the crops and other vegetation, which was thought to be a result of the resurrection of Osiris. The ring is a symbol of rebirth featuring red sapphires.

Egyptian mythology was the belief structure and underlying form of ancient Egyptian culture from at least c. 4000 BCE (as evidenced by burial practices and tomb paintings) to 30 BCE with the death of Cleopatra VII, the last ruler of the Ptolemaic Dynasty of Egypt. Every aspect of life in ancient Egypt was informed by the stories which related the creation of the world and the sustaining of that world by the gods.The gods and goddesses of Ancient Egypt were an integral part of the people’s everyday lives. It is not surprising then that there were over 2,000 deities in the Egyptian pantheon. Some of these deities’ names are well known: Isis, Osiris, Horus, Amun, Ra, Hathor, Bastet, Thoth, Anubis, and Ptah while many others less so.The gods evolved from an animistic belief system to one which was highly anthropomorphic and imbued with magic. Heka was the god of magic and medicine but was also the primordial force, pre-dating all the other gods, who enabled the act of creation and sustained both mortal and divine life. The central value of the Egyptian culture was ma’at – which means harmony and balance. The Egyptian collection embodies the geometrical harmony of the ma’at while is at the same time inspired by the magic of these ancient mythological deities.

"I studied Literature and Drama at Queen Mary University of London, Method acting at RADA and obtained a Masters Degree in Cultural and Creative Industries from King’s College continuing to explore the inner psychological worlds of different characters in literary plays and novel adaptations.After nine years in London, a beautiful but unexpected acquaintance led me to Paris where I discovered the aesthetic values and style of the French. I had the luck to live in the most quaint neighbourhood of Paris, the Marais, where I was inspired by the charm of Rue Charlot , Rue de Sévigné and Rue Pastourelle, and got acquainted with the local Parisian artisanal products.After a couple of years in Paris I became a mother of two girls and I spent long hours thinking of the day that I would be offering my daughters unique jewellery pieces just like my grandmother offered me. This was the initial spark that inspired to create my own pieces derived from my own personal stories.To me the eternal value of jewellery is a symbol of ever-lasting love and now that my grandma has passed away, I feel her presence in the stories that each of her jewellery piece carries.The name Alkemeya was born out of my love for long lost civilisations and philosophies. The word encapsulates the spirituality of the branch of natural philosophy called Alchemy. Inspired by ancient Egyptian mythology, Kēme means black earth and refers to the fertile and auriferous soil of the Nile Valley. Alchemists attempted to purify, mature, and perfect certain materials into noble metals particularly gold through a seemingly magical process. The perfection of the human body and soul was thought to result from the ‘alchemical Magnus Opus’ and, in the Hellenistic and Western mystery tradition, the achievement of ‘gnosis’.To me Alchemy is an allegory for the magical process of jewellery making. Each Alkemēya collection has a story and each piece has a symbolic meaning giving special properties to its owner." Daphne Tsitsiliani 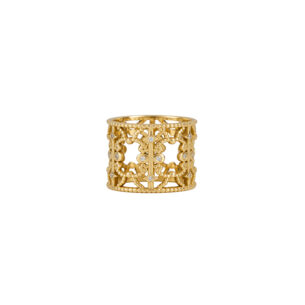 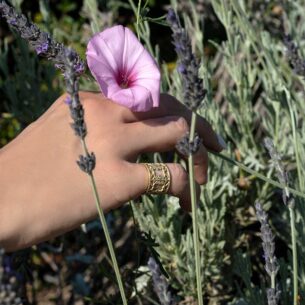 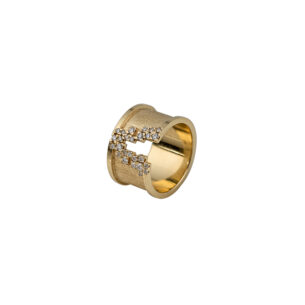 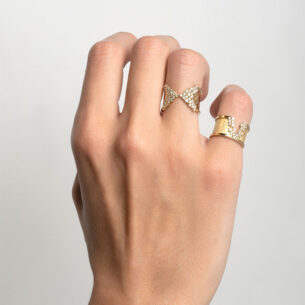 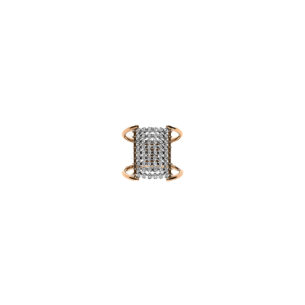 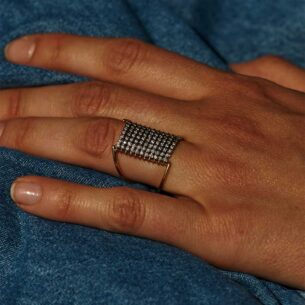